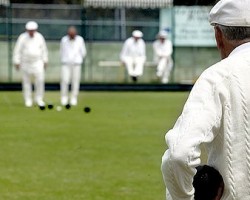 The Zone 11 (Manning District) Bowling Association Inc. is managed by an Executive Committee and Delegates (2) appointed from each of the 15 affiliated clubs of the Zone – known as the Management Committee.

The Zone 11 (Manning District) Bowling Association Inc. Management Committee meet on the fourth Monday of February, May, August and November. The August meeting will precede the Annual General Meeting.

In the semi they accounted for Austral 17-12.

Congratulations to Tony and George on this great achievement.

The team of Steve Crain (Leagues), Steve Pell and Peter Schroeder (Forster) have won the State RSL Triples Championship for the third time in the last five years.

They were beaten in the final last year, and played the same team from Windsor in the final this year. They did not allow history to repeat itself and exacted their revenge with a 27-20 win.

Congratulations to Warren Cocksedge (Taree Leagues) who has returned from the recent Australian Police Championships in Coolangatta with the Singles trophy.

In the semi-final Warren defeated the current NSW Police Singles Champion, and in the final he was too good for  fellow New South Welshman and defending champion GaryTrick. Warren said it was a game where everything turned to gold, and he led all the way to run out a 25-15 winner.

C of C SINGLES TO FORSTER

Forster bowler Shannon White has won the 2021 C of C singles, defeating Matt Pierce from Harrington 31-27. Matt led by as many as 10 shots mid way through this match, and nearing the finish led by 27-19. Shannon however came home like a rocket, scoring 12 shots to nil over the last 5 ends to take out the title.

We wish Shannon the best of luck in the State finals.